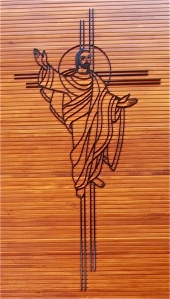 The price is paid. Come unto me.

Please carefully consider the following points, but only after you have studied chapters 12-15 regarding Daniel 7-12.

Daniel 8: the scenario, the units of time and the event at the end of the time

In Daniel 8, who is represented by the little horn?
In the visions of Daniel 2 and Daniel 7, Greece is followed by Rome.

So, is it correct to assume that, because the goat of Daniel 8 represents Greece (Daniel 8:21), and the large horn between its eyes represents Alexander the Great, and the four horns that replaced it when it was broken represent four Greek generals who divided Alexander’s kingdom between them after his death, therefore the unusual horn of verses 9-14 represents Rome?

The following statement in the Seventh-day Adventist Bible Commentary on Daniel 11:14 (Vol. 4, p. 868) means that one cannot overlook or ignore Antiochus IV, Epiphanes, and his actions.

Daniel 11:14: The threat posed by Antiochus Epiphanes confronted the Jews with a crisis comparable to the crises precipitated by Pharaoh, Sennacherib, Nebuchadnezzar, Haman, and Titus. During his brief reign of 12 years Antiochus very nearly exterminated the religion and culture of the Jews. He stripped the sanctuary of all its treasures, plundered Jerusalem, left the city and its walls in ruins, slew thousands of Jews, and carried others into exile as slaves. A royal edict commanded them to abandon all rites of their own religion and to live as heathen. They were forced to erect pagan altars in every Judean town, to offer swine’s flesh upon them, and to surrender every copy of their Scriptures to be torn up and burned. Antiochus offered swine before a pagan idol set up in the Jewish Temple. His suspension of the Jewish sacrifices (either 168–165 or 167–164 B.C., by two methods of reckoning the Seleucid Era; see Vol. V. p. 25n) endangered the survival of the Jewish religion and the identity of the Jews as a people. 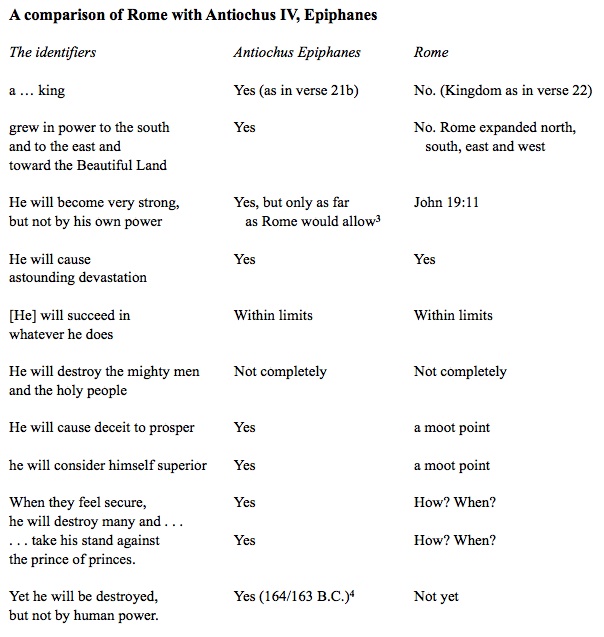 So, while there are some similarities between Antiochus IV and the Roman Empire, the weight of evidence leans in the direction of identifying Antiochus Epiphanes as the little horn of verse 9.

Notice that the vision ends with the words, “It will take 2,300 evenings-mornings; then the sanctuary will be reconsecrated (or, restored).” Then Gabriel gives an explanation recorded in vss. 19-25 which concludes with the comment, “Yet he will be destroyed, but not by human power.”

And so the end of this king’s reign removed the threat to the sanctuary and its services. That being so it is reasonable to calculate the beginning of the 2,300 days from their end. Antiochus’ death occurred 164/163 B.C. Thus 2,300 evenings-mornings prior to that would bring us to the year 170 B.C. the time of Antiochus’ first Egyptian Campaign after which he pillaged Jerusalem.

To insist that these “evenings-mornings” mean anything other than what they are said to be by Gabriel, the original inspired interpreter, viz., “evenings and mornings” as in verse 26 is neither fair nor warranted.

The Day of Atonement5

That the threat that was forecast would last for a little more than six years, is now a matter of history, and serves as a warning to any who would attempt a similar course of action.

The Day of Atonement. A day of judgment?
The Seventh-day Adventist Church has cited Jewish sources in an endeavor to support the position that the O. T. Day of Atonement was a day of (investigative) judgment.

“God seated on His throne to judge the world, at the same time Judge, Pleader, Expert, and Witness, openeth the Book of Records; it is read, every man’s signature being found therein. The great trumpet is sounded.; a still small voice is heard; the angels shudder, saying, this is the day of judgment; for His very ministers are not pure before God. As a shepherd mustereth his flock, causing them to pass under his rod, so doth God cause every living soul to pass before Him to fix the limit of every creature’s life and to foreordain its destiny. On New Year’s Day the decree is written; on the Day of Atonement it is sealed who shall live and who are to die, etc. But penitence, prayer and charity may avert the evil decree.” 6

Notwithstanding, in The Jewish Encyclopedia (page 286), a Jewish view, different from the above, is expressed as follows:

The Scriptures themselves yield the following relevant information which is akin to this position.

In Deuteronomy 16:6, 11, 16 we read of what are known as the “pilgrim festivals”, those annual events for which Israelites were required to go on a pilgrimage to the center of worship, unnamed in these verses but now known to be Jerusalem. The occasions? The Passover, The Feast of Weeks and the Feast of Booths. (See also Exodus 23:14-17 and 34:18-23). The Day of Atonement is not listed.

This means that its ritual was performed on behalf of all Israelites on one day, for all their sins (Leviticus 16:16, 21, 22, 30, 34) while they were still at home. Even so, although they might not be in Jerusalem for the occasion, all Israelites were directed to participate in its spirit. The KJV of Leviticus 16:29, 31 translates this injunction as “ye shall afflict your souls.” (The Merriam-Webster online dictionary reveals that the original, but now obsolete, meaning of “afflict” is “to humble”. As a matter of fact The Geneva Bible of 1599 reads “humble your souls”.) In either the text or footnotes of modern translations the term “humble yourselves” or something similar is employed. Psalm 35: 13 speaks of humbling oneself with fasting, and this theme is raised again in Isaiah 58 which takes the reader beyond ritual to reformation. These three points, the absence of the individuals from the ceremony, the fact that it was performed for all and for all there sins, and the need to participate in spirit, all symbolize the truth of the Gospel, the graciousness of God, and the response we owe Him, and not showing contempt for the riches of God’s kindness, forbearance and patience. See Romans 2:4.

Christ’s intercession began in the 1st Century A.D.
In her book The Great Controversy, page 482, Ellen White, in the following words, envisages Jesus’ intercession as a post-1844 event.

Jesus will appear as their advocate, to plead in their behalf before God. “If any man sin, we have an advocate with the Father, Jesus Christ the righteous.” 1 John 2:1. “For Christ is not entered into the holy places made with hands, which are the figures of the true; but into heaven itself, now to appear in the presence of God for us.” “Wherefore He is able also to save them to the uttermost that come unto God by Him, seeing He ever liveth to make intercession for them.” Hebrews 9:24; 7:25.

It should be noted, though, that these Scriptures that Ellen White has quoted were written in the present tense and therefore indicate that such intercession was available when they were written, in the first century A.D., and thus prior to 1844.

In conclusion and to recapitulate
The Book of Daniel is about God’s intervention on behalf of His people in Daniel’s day and in the days beyond. Chapter 8 speaks of one incident. Chapter 9 explains the time frame in which this would happen. Chapter 7 shows that no enemy of His people would go unjudged and unpunished.

In other words, the O.T. Day of Atonement, rather than being a day of (investigative) judgment, was intended to be a type of that occasion when God through Jesus Christ would unite human beings with Him, a true at-one-ment.

The book of the prophet Daniel was written to reassure God’s people. Later came His Son, Jesus Christ, the greatest of all the prophets, to seal that assurance with His death on the cross.

1 These two Hebrew terms, “ereb-boqer” (trans. “days,” “evenings-mornings”) and “nisdaq” (trans. “cleansed,” “justified,” et al.) occur nowhere else in Scripture. Note that, while the word “nisdaq” is derived from another word, “sadaq”, which does occur elsewhere, “nisdaq” itself only occurs here. The same applies to the word “chatak” (trans. “decreed”) in Daniel 9:24. Regarding the meaning of these words, the importance of the context in which they occur cannot be overestimated.

2 “Cleansed” or “justified”?
Before reading any further, please read the quotation from the Epistle Dedicatory to the KJV in my Chapter 4, “About Translations.”
● In the KJV’s marginal reading for Daniel 8:14 the word “justified” is offered as an alternative to “cleansed”. Because the theological definition of the word “justify” is “to declare innocent or guiltless, to absolve, to acquit” students of the doctrine of “Justification by Faith,” might well ask, “Why would the translators of the KJV offer the word ‘justify’ as an alternative to ‘cleanse’? Why would the sanctuary, a building, have to be declared innocent, absolved or acquitted?”
● However, the theological definition is not the only definition of the word “justify.”
● The context is not one of theology but of an historical event. It is not one of a sinner’s (a person’s) being accepted by God on the merits of the Sinless One. Rather, the context is one of the desecration of the sanctuary (a thing) by a foreign ruler, a successor to Alexander the Great, the conqueror of the Medes and Persians.
● The answer lies in the origin of the word in Latin: “justus” (Eng. “right” in the legal sense) and “facere” (pron. `fack-er-`ay) (Eng. “to make” or “to do”).
● Simply put, the legitimacy of the sanctuary as the center of Jewish worship had been jeopardized by its desecration. At the end of 2,300 days something would be done to rectify this.

3 After the Romans had defeated the Macedonians at Pydna, Greece, they gained more influence in the Eastern Mediterranean region. In a suburb of Alexandria, the Roman ambassador to Egypt, “Gaius Popilius Laenas, presented Antiochus with the ultimatum that he evacuate Egypt . . . [which he had just invaded] immediately. Antiochus, taken by surprise, asked for time to consider. Popillius, however, drew a circle in the earth around the king with his walking stick and demanded an unequivocal answer before Antiochus left the circle. Dismayed by this public humiliation, the king quickly agreed to comply.” Encyclopaedia Britannica, 1974 edn., Volume 1, pp. 994-995.

5 Yom Kippur is the Hebrew name for this day, as is also Yom Kippurim. The word “kippur” means “atonement”, but its origin is in the Heb. word “kaphar” = to cover. See entries 3722 (kaphar) and 3725 (kippurim) in Gesenius’ Hebrew-Chaldee Lexicon of the O.T.